We are very pleased to announce the 2012 major release of OrcaFlex, version 9.6. As always it takes time to produce and despatch installation CDs but clients with up-to-date MUS contracts can expect to receive the software in the first half of November. In fact we are thinking of switching to electronic distribution for future releases, which would mean that you would get the upgrade sooner after release.

The major enhancements introduced in 9.6 are as follows:

As usual there are a large number of improvements to the program, far too many to discuss here. Full details can be found in the OrcaFlex help file.

Previous releases of OrcaFlex were 32 bit programs. Version 9.6 introduces 64 bit OrcaFlex. It’s perhaps not the most exciting development – it looks absolutely identical to 32 bit OrcaFlex! 64 bit Windows operating systems have been around since 2005, but only in the past few years have they become prevalent. One of the great features of 64 bit Windows is that it runs 32 bit programs exceedingly well. And, up until now, that’s how OrcaFlex has always been run on 64 bit Windows.

We have not released a 64 bit version of OrcaFlex until now because our compiler vendor has not supported 64 bit Windows until quite recently. Fortunately there has been little need for 64 bit OrcaFlex. However, that is beginning to change. In particular the proliferation of multi-core and multi-processor machines is significant. A 32 bit process is limited in how much memory it can address – that limit is 4GB. Even if you have a machine with more memory, the 32 bit process can only see 4GB of it. This limitation can be restrictive for machines with a lot of processors and 64 bit OrcaFlex removes the restriction.

The other significant benefit relates to interfacing with other programs. Although 64 bit systems can run 32 bit processes, all the code inside a single process must be the same type. So a 64 bit process can only execute 64 bit code, and a 32 bit process can only execute 32 bit code. This means that if you have 32 bit Excel installed, then the OrcaFlex spreadsheet add-in must also be 32 bit. In the past that meant that you could not use the spreadsheet add-in with 64 bit Excel. Likewise, users of the Python and MATLAB interfaces had to install 32 bit versions of Python and MATLAB. With OrcaFlex 9.6, you can use OrcaFlex with either 32 bit or 64 bit versions of all these other programs. It’s not compulsory to update your existing Excel, Python or MATLAB installations to 64 bit. If there’s no pressing need to do it, don’t bother. We will carry on supporting 32 bit OrcaFlex for a long time to come.

The line contact model supports relative axial motion between the contacting lines and can include axial friction.

This new line contact model is distinct from the previously existing line clashing model in OrcaFlex, which is still available.

The new contact model is a very significant development for OrcaFlex. It has been very challenging to implement, mainly because we have been very ambitious in the scope of the new contact model. The new model is extremely flexible and can be used to model a huge variety of scenarios. The challenge has been achieving this level of generality whilst maintaining the calculation robustness that our users expect. The new functionality has been on extended beta test with a number of OrcaFlex users and feedback has been very positive. We are very excited and proud of this new capability and hope that it proves useful and helpful to our users.

To address that limitation we have implemented the full QTF double sum. The option of using the Newman approximation has been retained and there is a new option to use full QTFs instead. Full QTF data can be directly imported from either WAMIT or AQWA. If your data comes from a different source then you will need to pre-process it into a single table of values which can then be pasted into OrcaFlex.

Note that version 9.6a has disabled the option to import data from AQWA because we are as yet uncertain what phase conventions are used in the AQWA output file. We will resolve this in a minor 9.6 upgrade.

One of the key facilities that enables the OrcaFlex integration with the Shear7 VIV code is the ability to generate Shear7 modes files. In previous versions of the program, the creation of Shear7 modes files was limited to lines which did not model torsion. That covers the vast majority of cases and has not been a significant limitation. However, there are occasions when this limitation is inconvenient. So, for version 9.6, we have done the extra work required to allow modes files to be generated for lines with torsion.

Just before we completed work on version 9.6a, a new version of Shear7 was released, version 4.7. We did not have sufficient time to be able to update OrcaFlex to work with Shear7 4.7. However, we will do so over the next few weeks, and intend to include support for Shear7 4.7 in a minor update to 9.6.

OrcaFlex 9.5 introduced built-in P-y models. This feature has been very well received, but it had one glaring weakness – the program assumed that the undeformed configuration of the P-y springs was vertically upwards. For version 9.6 we have extended the functionality to cater for slightly off-vertical lines. The undeformed configuration of the P-y springs is determined by the end orientation at the bottom end of the line.

Finally, we have changed the implementation of the API RP 2A soft clay model to use the modified P-y table introduced in Supplement 3 to the code.

In version 9.5 we added the external function output window so that you could print debugging information to a text console. That’s a step forward but, as the saying goes, pictures speak a thousand words. So, in version 9.6 an external function can define results variables. These results variables are just like any other OrcaFlex results variables. They can be plotted as time histories, range graphs or XY graphs. They are available through all the post-processing interfaces that OrcaFlex exposes: Excel, Python, MATLAB, etc. 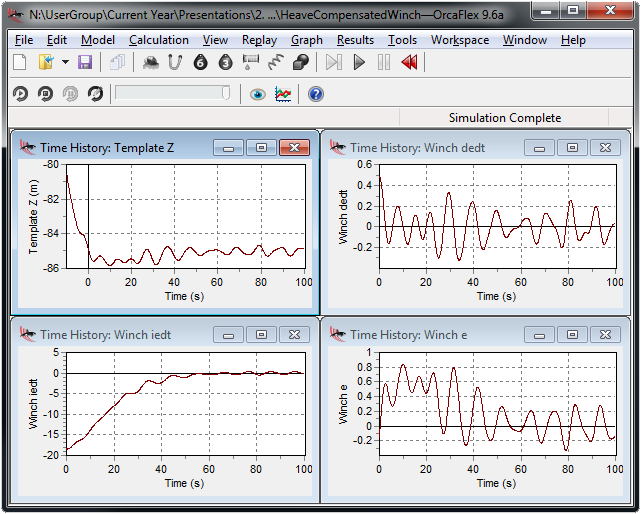 The Template Z plot shows the heave compensation system attempting to achieve a target value of -85m. The plots of the e, iedt and dedt results variables are, respectively, the proportional, integral and derivative parameters of the PID equation.