A year has elapsed since we released OrcaFlex 10.0, which means that it is time for the next version. We are very pleased to announce the 2016 release of OrcaFlex, version 10.1.

The software was finalised and built on 19th October. We are currently preparing the installation program, and will then dispatch the software. All clients with up-to-date MUS contracts should receive the new version early in November.

Version 10.1 introduces much new functionality, including:

These are the most significant developments, in our opinion. As always there are a great many more enhancements which are documented in the What’s New topic for 10.1.

Constraints are a new type of object that provide an enhanced, versatile means of connecting objects. They can be used to:

Constraints were developed primarily to enable simpler modelling of the following:

This list is not intended to be exhaustive. Constraints can be applied in many other situations.

What are constraint objects?

Typically, a constraint object will be used as a means to connect objects together. The constraint is connected to a master object (e.g. vessel, buoy, line, etc.), and has one or more objects connected as slaves. Constraint objects themselves have no physical properties such as mass or volume, and do not attract hydrodynamic or aerodynamic loading. Their utility is derived entirely from the out-frame’s ability to move relative to the in-frame.

There are two distinct modes of operation for constraints, Calculated DOFs and Imposed displacement. These two modes offer different ways of controlling the relative movement between the out-frame and the in-frame.

Individual DOFs, three translational and three rotational, can be either calculated or fixed, as determined by the input data. For example, to specify a single rotational degree of freedom, about the local y-axis, as would be used to model a hinge, the input data would look like this: 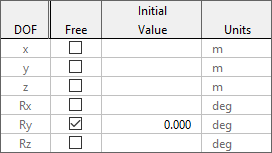 The column of check boxes titled Free is used to specify which DOFs are free and which are fixed. Different settings for these check boxes allow different types of connection to be modelled. For example, to model a telescoping joint you would make a single translational DOF be free.

To demonstrate how the above data models a hinge, the animation below shows the constraint, with a buoy attached to provide mass, acting as a pendulum. The axes drawn with a solid pen represent the in-frame, fixed to global. The dashed axes represent the out-frame. The single degree of freedom is Ry, rotation about local y, where y is normal to the view.

Prior to the introduction of constraints, there were a variety of standard workarounds that could be used to model hinges, articulations, telescoping joints etc. For instance, hinges would usually have been modelled using very stiff single segment lines. But these workarounds were often tricky to build, and sometimes caused numerical problems. With the advent of constraints these issues become a thing of the past.

In addition, calculated constraints also allow specification of stiffness and damping, which can be linear or nonlinear. These properties can be used to resist displacement and velocity of the out-frame relative to the in-frame. Further, applied loads can be specified (constant, time varying, or externally calculated) and applied to the out-frame.

The original motivation for constraints was the Calculated DOFs mode. However, as that feature took shape we realised that these objects could be useful for other forms of connection / constraint. Thus were Imposed Displacement constraints born.

Before this release, the only object capable of imposing motion (as opposed to calculating motion) was the vessel. This could be done through prescribed motion, time history, or external calculation. Although it feels odd to use an OrcaFlex vessel as a means to impose motion, that sort of trick is quite common in OrcaFlex. However, the real weakness is that vessels cannot be connected as slaves of other objects. Constraints have no such limitation.

Having given pre-release demonstrations of constraints to many users over the past few months, I can safely say that they have generated more excitement than any new feature since we added the implicit time domain solver. We hope you have as much fun with them as we have had!

These enhancements now mean that OrcaFlex has a frequency domain engine capable of performing mooring analysis in the frequency domain. However, this should really be considered a work in progress. While the solver is very capable, there are further enhancements that would make it easier to use:

We feel that we have made a good start towards making OrcaFlex an effective tool for frequency domain mooring analysis and now have a powerful solver which we can build on and improve. We would really appreciate and encourage feedback to help guide us in making the next steps towards that goal. So, if you have interests in this area, we would love to hear from you and learn how you feel the program could be improved.

In recent releases we have added a number of features to make modelling of connections more flexible:

As a fun demonstration, the animation below shows a single line with the node at the mid-point connected to a constraint object. The constraint object introduces a single translational degree of freedom. The simulation was started with the mid-point node initially perturbed and then released at the start of dynamics. The resulting motion is, in essence, just like the pendulum above.

Obviously this is not intended to be an example of real-world OrcaFlex modelling, but it hopefully serves to illustrate the point. Without mid-line connections this model would have required two separate line objects, joined together at the constraint. Modelled with mid-line connections, a single line can be used, and more importantly, a single range graph plot can show the results for the entire line.

Way back in version 9.2 (released in 2008) the OrcaFlex batch functionality was extended to make use of all the processors on a machine. Before then jobs were processed in serial fashion. This was an excellent development, but as is so often the case, changes in computer hardware soon caught up with us. Machines with larger numbers of processors became available, and such machines come with complications:

In version 10.1, we have made changes to support machines with more than 64 processors, and to be aware of NUMA. As a result, OrcaFlex batch processing now scales much better on such machines.

The solution that we are opting for with Distributed OrcaFlex is to use multiple processes rather than multi-threading as used by OrcaFlex batch processing. One consequence of using multiple processes is much better scaling for Python external functions and post-calculation actions. So if you integrate Python code in that way you might find that the new Distributed OrcaFlex implementation is useful – even if you only want to process jobs on a single machine.

So, that’s OrcaFlex 10.1. We hope you enjoy it, and find good use for all the new features. We are already busy working on 10.2 which you can expect to see towards the end of 2017.

However, writing programs to automate OrcaFlex can be a daunting task, especially to many OrcaFlex users who typically are not experienced programmers. The documentation for the Python interface is a useful reference once you know your way around, but does not provide a simple introduction for beginners. This year we have attempted to address that concern by developing and running Python workshops, which have proved to be very popular.

In order that as many of our users as possible can benefit from these workshops, we are making available the primary document produced for the workshops. This is a high level overview and introduction to the Python interface that attempts to fill in some of the gaps not covered by the reference documentation. This introduction document can be downloaded from our documentation page. As well as the document, all Python source files from the document are included as a convenience.

We hope that this improvement to our documentation will make the Python interface more accessible. If any of our users have further suggestions for improvement, we welcome them.

In a recent paper (Impact of Bathymetry on the Mooring Design of an Offshore Floating Unit, OMAE2016-54965), DNV GL authors Jaiswal, Vishnubholta, Cole, Gordon and Sharma examine the effect of using an accurate seabed bathymetry on typical mooring results. Their motivation was to understand potential limitations in the assumption made by most mooring software that slope of the seabed is constant along the direction of each mooring line.

To explore this they consider the case of a hypothetical 8-legged all-chain-moored semi-submersible, located over a simple escarpment (with a constant profile). Consequently the water depth at the anchors varied between c150m and c250m. They considered two different seabed representations: (1) the accurate bathymetry, and (2) an approach equivalent to the constant slope assumption in most mooring software.

Results for line pre-tensions and the min and max values of vessel offset and line tensions are compared for each seabed representation. They conclude that there are “significant differences” in vessel offset and maximum mooring line tension when using different seabed representations. The authors point out that these results can’t be generalised, but further conclude that where there is uneven seabed bathymetry and marginal safety factors, it may be advisable to use a more accurate bathymetry.

You can download the paper from the ASME paper here.

The next OMAE conference is to be held in Trondheim, Norway, in June 2017. Orcina are planning to attend and we look forward to seeing you there.