We are very pleased to announce the 2011 major release of OrcaFlex, version 9.5. As always it takes time to produce and despatch installation CDs but clients with up-to-date MUS contracts can expect to receive the software in the first half of November.

The major enhancements introduced in 9.5 are as follows:

As usual there are a large number of improvements to the program, far too many to discuss here. Full details can be found in the OrcaFlex help file.

Both lumped buoys and stacked buoys now (optionally) include slam loads when the buoy is piercing the surface.  The implementation is based on DNV-RP-H103.

The slam force applied upon water entry or exit is then given by:

The hydrodynamic loading for calculated vessels has been greatly enhanced in version 9.5. These changes are significant and far-reaching. If you use the calculated vessel features we recommend that you read the documentation carefully to learn about these changes and understand their impact.

In terms of functionality the most significant changes are the addition of wave drift damping loads and manoeuvring loads.

Seabed interaction for a line can now be based on lateral P-y springs. When this option is selected no normal seabed reaction is applied to the line.

The P-y data input is very general and allows you to model the depth variation of both soil type and soil properties. Three different formulations are available for the P-y springs:

The two API RP 2A formulations allow you to enter the soil properties directly and let the program calculate the spring properties using the formulae given in the API code. Because the program performs rather complex model building on your behalf we have extended the line properties report to give full details of how the data has been interpreted.

A new line type category, Equivalent Line, has been added. This is intended for simple modelling of pipe-in-pipe and pipe-on-pipe lines. The program calculates combined line type properties (geometry, mass, stiffness etc.) of a number of different line types.

For example, consider a pipe-in-pipe system. These are often modelled by combining the properties of both external and internal lines into a single representative line type. Single representative values for mass, diameters, stiffnesses, etc. must be calculated. Whilst these calculations are simple enough and can be performed off-line in a spreadsheet, the equivalent line type category will perform the calculations for you.

The input data for an equivalent line type comprises the following:

Given this input, the program derives equivalent properties. Again, because the program is performing significant processing of your input data, the line types properties report has been enhanced to include the derived properties.

Most, but not all, OrcaFlex functionality can be automated using one or more of the automation interfaces (batch script, Excel, Python, MATLAB). Version 9.5 adds automation support for the following areas of functionality:

Following these additions, there are very few OrcaFlex features that cannot be automated.

You can now attach a 3D view to any Vessel, 6D Buoy or Shape object in the model, by specifying that the view parameters are relative to that object, instead of being relative to global axes. When a 3D view is relative to an object, it shows the view from a camera that moves with that object. This is especially useful for towed cases where the system being modelled moves a large distance during the simulation.

The Model Browser can now be docked inside the main OrcaFlex window. The traditional floating Model Browser window is still available as an option. You can choose between the various options by right clicking on the Model Browser and selecting Floating, Dock Left or Dock Right.

The docked option is especially useful for modern wide screen monitors. In addition the docked Model Browser will not cover up other windows and is clearly associated with its particular OrcaFlex instance, if you have more than one. 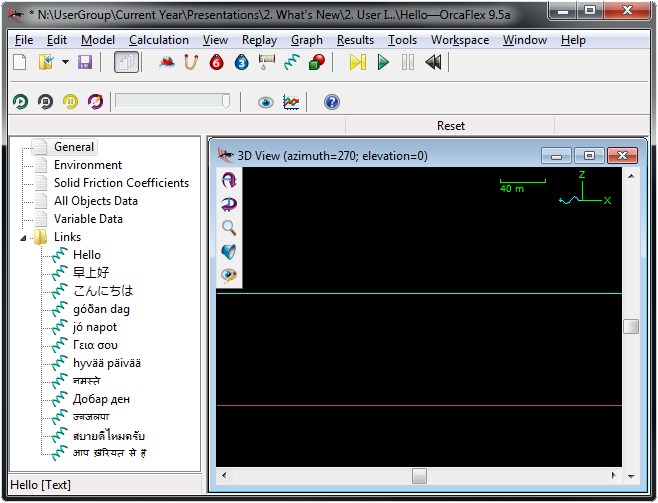 As an aside this image also demonstrates the new ability of OrcaFlex 9.5 to accept international text using the Unicode standard.