We are very pleased to announce the release of OrcaFlex version 11.1. The software was finalised and built on 12th February. We originally planned to release 11.1 in Q4 of 2020. However, we delayed the release in order to complete the restart analysis development. We plan to make the next release in the traditional Q4 slot, later this year.

All clients with up-to-date MUS contracts will receive, in the week starting 22nd February, an e-mail with instructions on how to download the new version.

Version 11.1 introduces much new functionality, including:

Restart analysis is a common feature in many finite element codes, but for various historical reasons, OrcaFlex has not implemented restart analysis until now.

Because a restart typically changes only a small number of data items, we want the restart data file to contain only the data that is different from the data in the parent. To achieve this we have extended our existing YAML text data file format. These text data files can define the entire data for a model, but more commonly they are used to make a small number of data changes to a base model. We refer to this as a variation model. Here is a simple example:

The model defined by this file is the same as base.dat, but with changes made to the wave height and period.

In previous versions of OrcaFlex you had to create these variation files manually in a text editor. And when you loaded these files in OrcaFlex the data changes were applied but the program did not keep track of the changes.

Starting with 11.1, OrcaFlex now implements change tracking. When the above model is loaded, the environment data form looks like this: 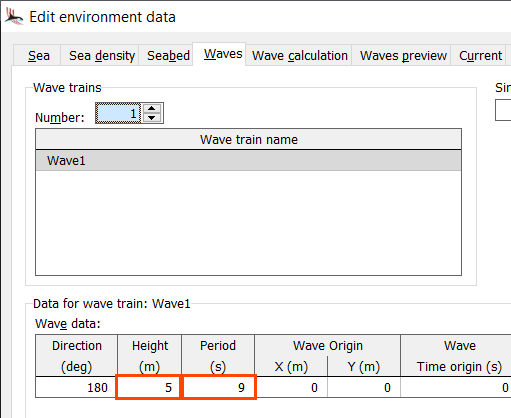 Restart files are very similar, differing only in the use of RestartingFrom instead of BaseFile. For example:

This makes a single change to the data inherited from the parent model. When editing the data in the GUI, this change is highlighted on the object data form: 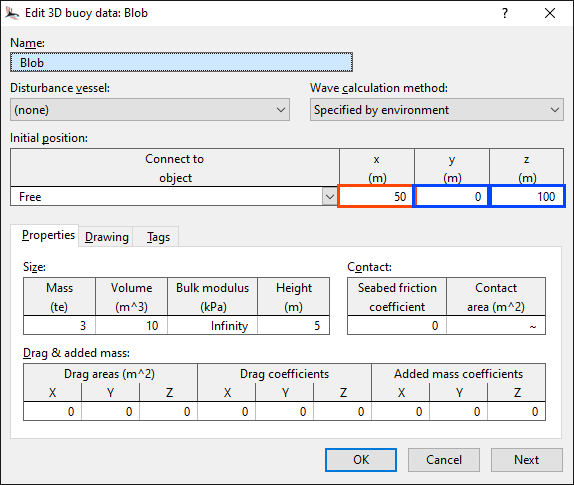 The model data can even be edited (in text format) from inside the program with a built-in text editor. 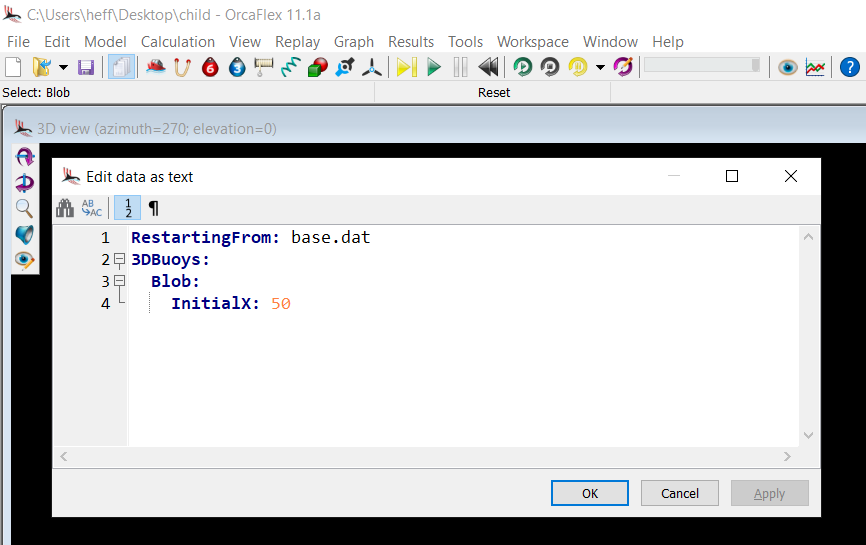 This feature can be used to find which data have been modified. Mass changes can quickly be made by editing the text.

Restarts can be useful for a variety of modelling tasks that would otherwise be difficult or impossible to achieve. Examples include:

We are quite sure that this list only scratches the surface of what can be achieved with restarts and are looking forward to discovering what other uses you find for restarts.

OrcaWave is our diffraction / radiation code, released last year with 11.0. Since that initial release we have continued to develop it.

Over the course of the 11.0 minor updates we have added support for a host of new mesh file formats (Hydrostar, Aqwa, Sesam, Gmsh) and these formats have also found their way into OrcaFlex panel mesh import for drawing.

As well as all the work on solvers, we have identified other performance bottlenecks and optimised that code. We have also reduced memory usage and added a report of expected memory usage.

OrcaWave can now perform analyses that make use of a previously performed analysis. The idea is that the time-consuming step of populating and solving the first-order boundary integral matrix equations is performed once, and then subsequent analyses can avoid repeating this calculation.

This is only possible if the input data on which first-order solution depends matches between the parent and child models. This is data such as body mesh, wave periods, water depth, etc. Data that may be modified in the child model includes:

Roll damping results have been added which show the level of roll damping, relative to critical, for each body. A new data item allows you to specify a target percentage, in which case OrcaWave will increase the external roll damping coefficient to meet the target.

The new triangulation method often performs better for waterlines with a large aspect ratio (e.g. a typical ship) and it can also handle highly concave waterlines, for which the radial method breaks down.

We have made a number of improvements to the waterline detection algorithm.

There is a new option (on the calculation & output page) to divide non-planar panels on import from panel mesh files. If this is checked, any panels that are determined to be non-planar (projection length exceeding the length tolerance) are split into two triangles.

New data items have been added that allow you to reduce the number of second-order loads that OrcaWave will compute.

The QTF crossing angle range applies to the wave headings included in mean drift loads and full QTFs. The absolute value of the crossing angle is restricted to the specified range. The default range [0°, 180°] means all crossing angles are considered. Setting the range to [0°, 0°] restricts to unidirectional waves.

If full QTFs are being calculated, you can also restrict the range of QTF periods or frequencies considered. If the number of QTFs is significantly reduced, this can in turn reduce the calculation time.

A number of minor enhancements have been made for drawing.

Turbine blades can now be pre-bent to model blades which are not straight in their unstressed state. Modelling pre-bend can have a significant impact on the dynamic response of a turbine and so this is an important enhancement.

Range graph results are now available for turbine blades. This allows you to plot the variation of a result variable over the length of a blade, in exactly the same way as line range graphs.

Finally, we have provided a new turbine example which models the NREL 15MW reference wind turbine. This is notable because it uses the NREL reference open source controller (ROSCO).

Because of the way the components are distributed, removing a small amount of the overall spectral energy typically results in a huge reduction in the number of components to be evaluated. As always, we recommend that you perform sensitivity studies to convince yourself that these optimisations don’t have a significant impact on the results of interest.

Wire frame drawings for buoys and vessels have historically been specified by lists of vertices and edges that define a set of line segments. When drawing in the shaded graphics mode, OrcaFlex will use these data if a separate 3D model (.x or .obj) has not been provided. In order to do this, OrcaFlex needs a set of triangular panels which it obtains from the wire frame edges by finding the smallest convex hull containing those edges.

In version 11.0, primarily for use in OrcaWave, we developed code to read from a range of panel mesh files. We made use of that code in OrcaFlex, adding a feature to import such panel mesh files as wire frame drawings. In version 11.0 we converted the panel mesh into vertices and edges, since that was the format of the data in that version. However, we have subsequently realised that it would be beneficial to retain the panel information. If we do so then we do not need to calculate a convex hull when using the wire frame data in the shaded graphics mode. Not only does this save on calculation time, it means that non-convex shapes can be drawn correctly.

So in OrcaFlex 11.1 the wire frame drawing data can now be specified either by edges (as in previous versions), or by panels. The panel mesh import facility allows you to choose which specification to use (edges or panels). We would usually recommend using panels and expect that importing wire frame data as edges would only be useful when sharing data files with users who do not have access to 11.1.

In addition to specifying the data as panels, wire frame drawing data can now take advantage of the symmetries that are common in these data. This allows for more efficient storage for detailed panel mesh data. 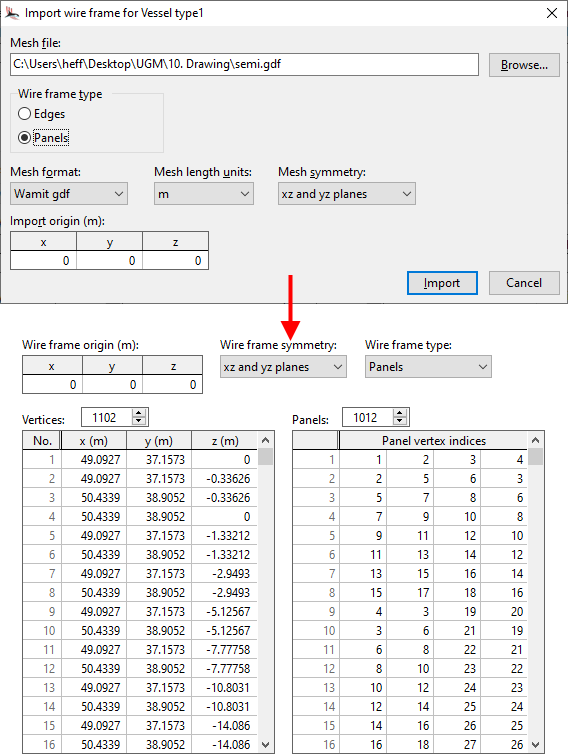 Embedded Python scripts as an alternative to external files

OrcaFlex has a number of features based on executing Python code specified in external Python script files. These features are external functions, post calculation actions, and user defined results. As an alternative to specifying the script in an external file, the script can now be embedded in the model data. This can make workflow easier because the input data can be entirely contained in the input data file.

As well as catering for embedded scripts, we have introduced a very basic pop-out editor which has support for syntax highlighting, code-folding etc. Note that we have no ambition to include a fully featured text editor in OrcaFlex, and so if you need more functionality than we have provided you should use an external text editor. 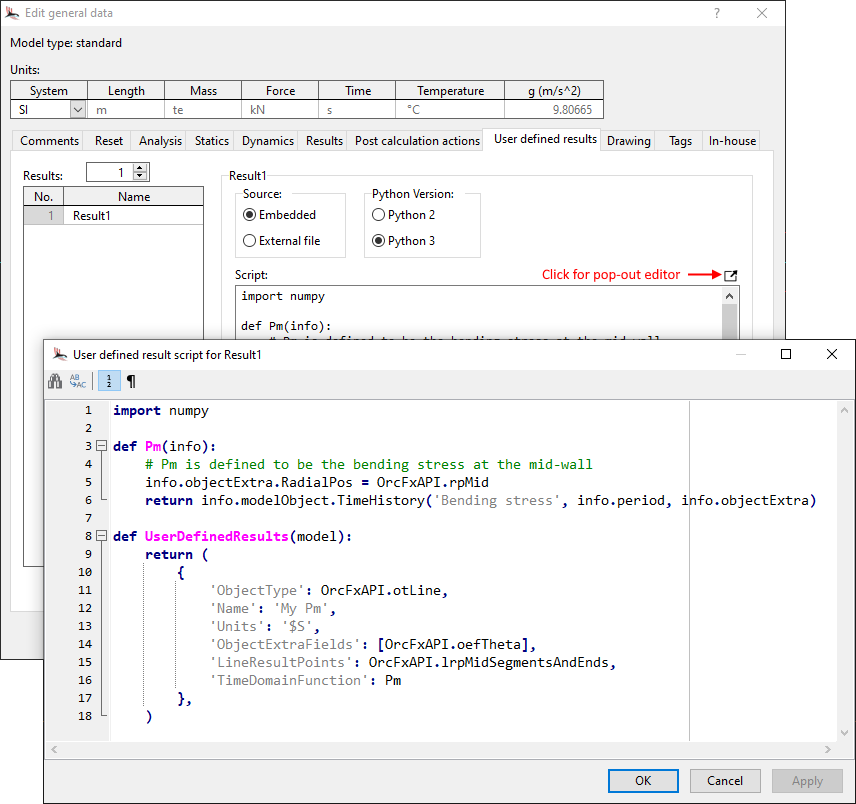 While having these scripts embedded can be very convenient, there are still numerous situations where external scripts may be preferable:

This is not to say that embedded scripts are not often very useful, but it is always important to use the right tool for the job.

So, that’s OrcaFlex 11.1. It has been a long time in the making, and we hope that it proves to have been worth waiting for!