We have now released the non-linear seabed soil model in OrcaFlex 9.2e. The model has been developed by Professor Mark Randolph (Centre for Offshore Foundation Systems, University of Western Australia), a recognised expert in this field, and we have been working with Mark to implement the model in OrcaFlex.

The model is for modelling the seabed resistance for catenary pipeline contact. It takes as input the line diameter and the seabed soil geotechnical properties (undrained shear strength at the mudline, shear strength gradient with depth, soil saturated density). It then calculates the seabed reaction force on each line element as a function of the penetration, allowing for non-linear penetration resistance, hysteretic effects due to uplift and repenetration, and non-linear suction forces.

Some of the model characteristics are illustrated in the following diagram. For comparison, the standard OrcaFlex linear seabed model would give just a straight line seabed reaction curve in the diagram. 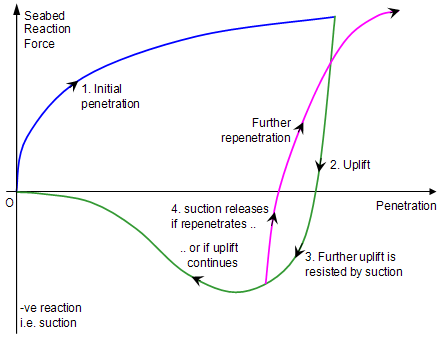