Below is a list of links to OrcaFlex example topics. Within each topic are a number of examples which each comprise one or more simulation files, a description pdf file, workspace files and sometimes other supporting files. The files for each example are zipped for easy download. The simulation files can be opened and viewed with the demonstration version of OrcaFlex.

This model shows a method commonly adopted for the deployment of a deep water oceanographic mooring. The mooring is streamed out behind a moving vessel, with the top end buoy as the first object in the water, furthest from the vessel. When the whole length of the mooring has been deployed, the anchor is tied off at the vessel stern, and the vessel proceeds to the correct mooring position. Without stopping the vessel, the anchor is cut free, and the whole mooring free-falls until the anchor hits the seabed.

Note that the mooring line may go slack when the anchor strikes the seabed. If the line is not perfectly torque balanced, it is possible for loops and kinks to form in the line, which may lead to early failure of the mooring. The model assumes that the line is perfectly torque-balanced and that the installation is carried out in still water. 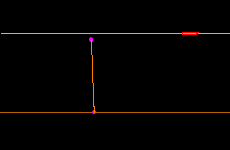